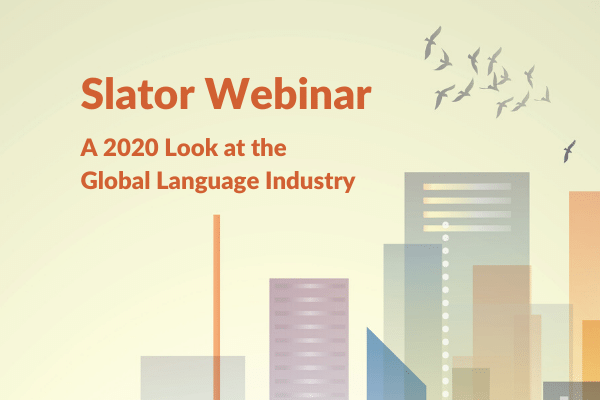 As events worldwide continued to move online, Slator held its inaugural webinar, “A 2020 Look at the Global Language Industry,” at 4:00 p.m. CEST on May 14, 2020. The webinar featured panelists who dialed in from Europe, North America, and Asia to discuss updates on the language industry after the world hunkered down and shuttered to weather the Covid-19 storm.

Open to buyers of the Slator 2020 Language Industry Market Report and subscribers to Slator’s Strategy and Research Packages, the webinar was hosted by Slator Co-founder and Commercial Director, Andrew Smart, who moderated the event from Bangkok.

Next, Slator’s Smart interviewed Barnaby Wass, Senior Vice President of TransPerfect, who was speaking from Barcelona. The webinar was then capped by Brúnó Bitter, Chief Operating Officer of memoQ, who spoke on “Imagining the New Normal” from Toronto.

Discussing the USD 24.2bn addressable global language industry market (as at 2019 based on buyer spend), Slator’s Faes and Bond broke out the top 10 verticals of 2019 based on market size. The biggest contributions came from the Public Sector, Technology, and Travel & Retail, which together made up more than 46% of the market.

Travel & Retail (2.8bn) was, of course, among the most badly hit by Covid-19. According to TransPerfect’s Barnaby Wass, in the case of their Travel sector clients, “We have seen some of the budgets of the companies that have remained operational redirected to digital spend and ensuring that the brand remains out there so that they do not disappear over these months.”

Faes went on to discuss how some publicly-listed players in the language industry have proven resilient since the start of the pandemic: “Keywords and ZOO are up year to date and that’s really quite amazing. It’s a somewhat encouraging picture that some of these language service providers are actually holding up on the stock market. So that indicates that this industry is relatively robust.” Super agencies SDL and RWS also outperformed the broader markets.

Asked about the post-Covid prospects of the language industry as a whole, Faes replied that it was a tough question, but the industry typically follows the path of global GDP — that is, up 4–6% annually. He said, however, “there’s never been a year during the past three decades where global GDP has contracted. But now the global economy will contract and it will depend on how strongly it will bounce back.” He added that many stakeholders will be taking a hard look at current spend, which will make workflows more efficient and only accelerate existing trends.

“The fear of remote recording has suddenly gone away” — Barnaby Wass, SVP, TransPerfect

TransPerfect’s Wass was of the same opinion. He pointed out that the “shift toward digital content and digitization overall,” for instance, was “just an acceleration of something that was underway.” He added, “Dubbing, for example, one or two years down the line is where we would be today if the crisis did not happen.”

According to Wass, after “the (dubbing) market was forced to stop recording, going from full capacity to zero in a matter of days,” TransPerfect had “been able to run at high capacity” because of their cloud dubbing and voice-over solutions.

Wass noted how, in light of worldwide containment measures, “the fear of remote recording has suddenly gone away. Even traditional players who hated the idea of remote recording have been forced by the crisis to show that it was not such a bad idea and that — depending on the tools — it’s workable and scalable.”

Echoing the same, memoQ’s Brúnó Bitter said, “The pandemic is accelerating technology use and technological maturity — not just in the realm of remote communication but also in translation productivity.”

Cream-of-the-crop companies have increased their tech spend in the past 60–90 days, according to Bitter; and the increase was not just in the form of up-front investments to acquire, say, unicorn technology, but also to improve the workflow and optimize it toward achieving more automation and integration. “There is this growing recognition that better automation and stronger integration drive value and can decrease cost of doing business, and there is a very quantifiable ROI attached to it,” Bitter said.

How to Deal in the Aftermath of Corona

Capping the webinar, Bitter’s presentation included examples of how the impact of Covid-19 was playing out across the language industry. With project volumes decreasing, he said a company can go in either of two directions.

“Companies that do not just weather the storm but use this relative downtime to prepare for the next boom could be big winners” — Brúnó Bitter, COO, memoQ

The more common reaction in times of economic uncertainty is to let people go or decrease their salaries, Bitter said. “But there is another reaction: a commitment to not just keep teams intact, but using the extra available time for training and reskilling. It’s a huge opportunity to start focusing on things that can create value for a longer time.”

Pointing out how a recession is the best time to invest in new skills, Bitter said, “Companies that do not just weather the storm but use this relative downtime to prepare for the next boom could be big winners.”

He said, “We at memoQ provide a lot of content and training to our clients, but we also learn a lot from our own technology vendors — [such as] Hubspot and LinkedIn — these companies have increased their webinar offerings in the past few months.”