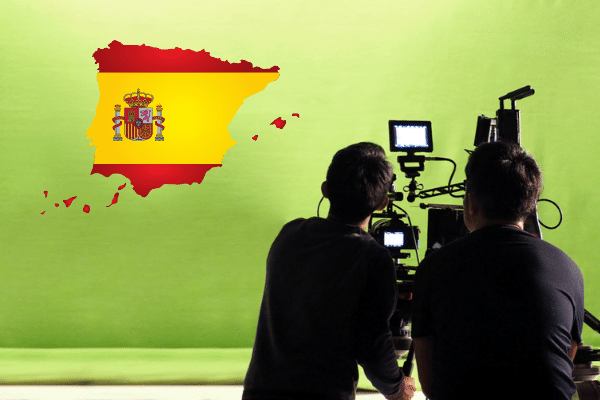 Silicon Valley and tech startups. Paris and fashion. Spain and…audiovisual production. It might not roll off the tongue just yet, but Spain wants you to get used to the pairing.

The nation got its head start as a desirable filming location starting with the fifth season of the HBO fantasy series Game of Thrones. Although the show brought waves of tourists to other filming locations in Ireland and Croatia, Covid-19 has since hit Spain and its tourism industry hard. The country’s response has been to embrace the work, behind-the-scenes, to become Europe’s newest audiovisual hub.

As reported on the heels of Spanish PM Pedro Sanchez’s July 2021 meeting with Apple CEO Tim Cook, the Spanish government plans to inject EUR 1.6bn into the audiovisual sector through 2025, with the goal of expanding the industry by 30%.

“The production of foreign audiovisual works in our country generates great opportunities both at a public and private level,” enthused Profilm, an association of Spanish audiovisual production companies. Among the group’s other activities, Profilm works to bring Spain’s tax incentives for audiovisual work in line with those of other EU countries.

Of course, this will require interest — parlayed into significant financial investment — by heavy hitters from big tech and entertainment alike. Sanchez said that Apple is particularly interested in AI development and TV production in Spain. In 2020, Apple paid about USD 50m to acquire Barcelona-based company Vilynx, which developed AI technology to help make video more searchable.

Apple’s Barcelona offices already include a number of AI/ML annotation analysts to improve Siri for a range of languages; and according to the company’s career pages, Apple could still use at least a few more. The company has even established a year-long AI/ML residency program for STEM graduates or experienced software engineers, to start in Barcelona in July 2022.

Madrid, on the other hand, is Netflix’s first European production center. But Netflix also sees the location as an ideal base for operations management for a wide swath of regions; from the German-speaking market (Germany, Austria, and Switzerland) to Southern Europe, and from the Middle East and Turkey to Africa.

“As Netflix is emerging into the Spanish market, there will be a collection of corporate, content, and production functions focused on this region,” Netflix promises, perhaps hinting not only at future roles but also future content for consumers based in Spain.

And there seem to be plenty of audiovisual specialists and language service providers (LSPs) ready to welcome these opportunities.

The LinkedIn group Directorio de empresas y profesionales del sector audiovisual (Spain) has 2,375 members. Online translation marketplace ProZ, with listings for 28,469 linguists and LSPs based in Spain, introduced a video portfolio in November 2020 for certain linguists, including audiovisual translators, to showcase their work.

Of course, all this attention on audiovisual production in Spain may take the form of partnerships or something else altogether.

American-owned TransPerfect, the world’s largest LSP by revenue, expanded its Media.NEXT media localization and video production suite in part through a 2019 acquisition spree that included Madrid-based companies Lassostudios and Sublime Subtitling. More recently, the company held an October 2021 conference in Barcelona, while celebrating a now-three-floor location in Madrid.

According to ATRAE, Netflix did not hire professional linguists to translate its most-watched series ever into Spanish. Instead, the streaming giant used machine translation that produced results of dubious quality, the group claimed, making national headlines.

This boom in local language content, highlighted by the phenom that is Squid Game, and the ensuing heightened demand for media localization into the world’s most-spoken language after English and Mandarin, makes it easy to see why Spain can very well be Europe’s next audiovisual hub.