US Military Equips Soldiers in the Field With Machine Translation

The US Army will soon reach full deployment of its so-called MFLTS project. MFLTS stands for Machine Foreign Language Translation System and is “the overarching Army Program with Department of Defense interest” to provide soldiers with machine translations via speech and text, explained MFLTS Product Director Michael Beaulieu in a presentation back in 2012.

An unclassified document Slator saw showed the projected total spend on MFLTS Research, Development, Test & Evaluation from 2013-16 amounted to USD 12.5m as of 2014. The program primarily comprises machine translation, automatic speech recognition, and optical character recognition. If one were to speculate just going by the screen grabs from Beaulieu’s presentation (shown below), the MFLTS works with, at least, two possible vendors; US defense contractor Raytheon for speech-to-speech and SDL for text-to-text.

Beaulieu once called language and linguistic capabilities one of the seven key cornerstones for success in the US counterinsurgency strategy. And the MFLTS drives those capabilities by rolling out machine translation tools via portable devices like laptops and smartphones. 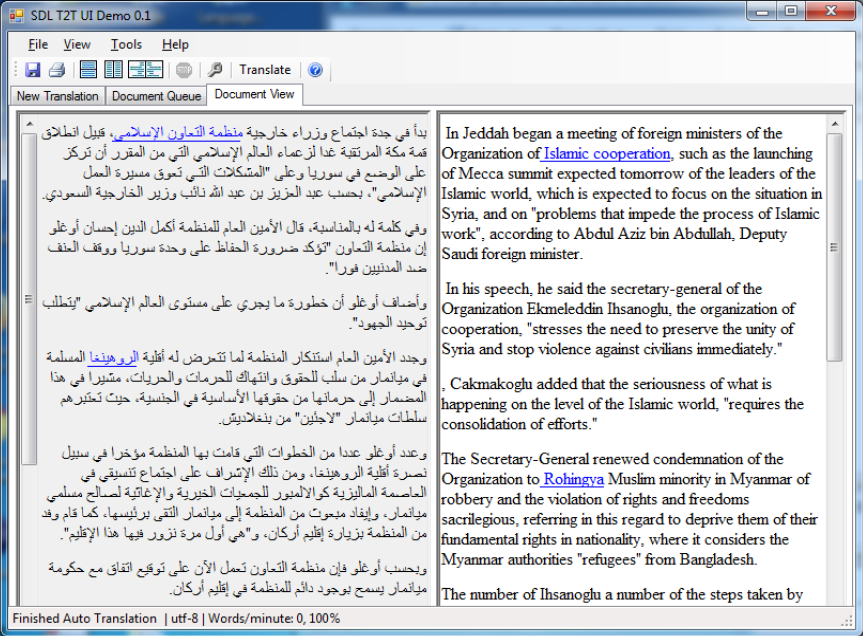 “Unfortunately there aren’t enough linguists to go around and not all of them can put on a rucksack and go up and down mountains in Afghanistan and follow troops around,” MFLTS Product Director Beaulieu pointed out, explaining that apps deployed under MFLTS filled a linguistic capability gap, which was “pretty important stuff.” 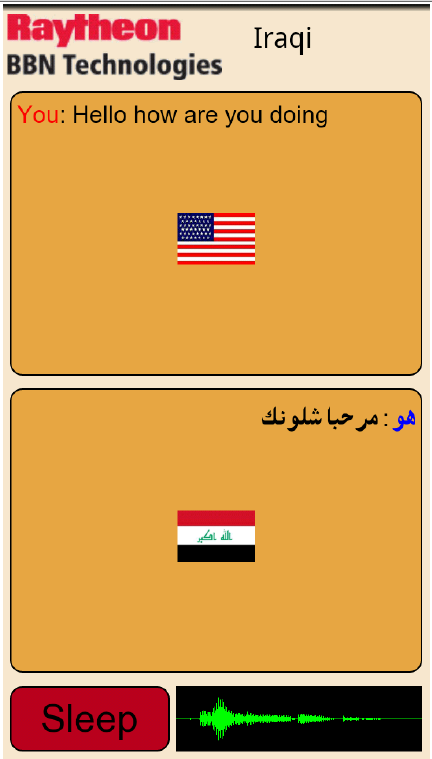 The earliest versions would use pre-scripted phrases (e.g., Get out of the car. What is your brother’s name? Do you have a bomb?). The soldier would touch the phrase and the device would “speak” in the other language to the native speaker.

MFLTS-deployed software are now used for tasks like, say, checking just how accurate an offered (human) translation is. However, it “does not replace human linguist support” from interpreters and translators, according to a November 30, 2016 US Army blog post, but “successfully augments and complements” it.

Apps rolled out under the program are designed to run on off-the-shelf devices (both commercially available and government issued) and are currently available in three configurations: Web-enabled, Mobile, and Portable.

Mobile is available via Army Golden Master, a system Microsoft had made Windows-compatible, where text-to-text and speech-to-speech translation can be accessed through a mobile device, such as a laptop.

Portable is used with the Nett Warrior system, where speech-to-speech translation can be accessed via smartphone, like the Samsung Galaxy Note II.

The same blog post said Web-enabled text-to-text is presently being integrated into the weapons system (i.e., DCGS-A) that generates intelligence for the army, “with a planned fielding time period of late 2016 or early 2017.”

The US Army plans to expand the MFLTS program to include a speech-to-text app “in the near future.”

Said Mike Beaulieu back in 2011, “If you can’t talk to the people who you are trying to win the hearts and minds of, it is kind of hard to win a counterinsurgency.”

The Army published the latest in a series of RFIs for the program on November 3, 2016 to develop Dari and/or Sorani Kurdish speech-to-speech translation language packs.