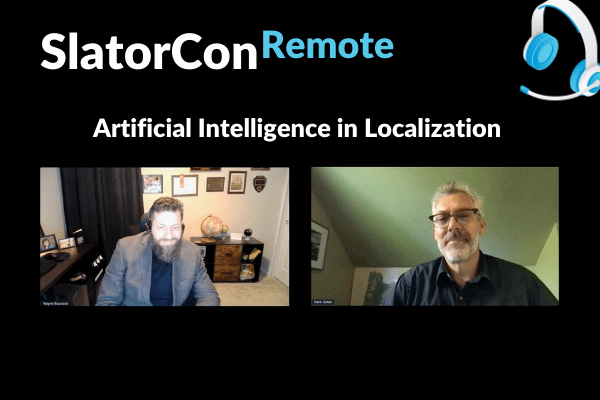 IT giant Dell was established nearly four decades ago. For about half that, it has worked with language service provider (LSP) Welocalize. At SlatorCon Remote May 2021, Dell’s Director of Translation, Wayne Bourland, and Welocalize’s VP of Solutions, Darin Goble, talked about their buyer-LSP relationship of 17 years.

Bourland has worked at Dell for more than 21 years, 14 spent in some translation-related role. Goble is a language industry veteran of 25 years, more than 7 of it working at Welocalize. The LSP currently supports the entire Dell global customer journey — from internationalization and localization to legal and automation.

Bourland told Goble, “You guys are honest with us. You’ll tell us when we’re making mistakes. You share how you’ve seen others become successful in certain areas.”

For his part, Goble said, the partnership has often been driven by innovation. “Wayne, you’ve never been afraid to bring in new ways of thinking and, ultimately, step up with new ideas on the integration of technology and process improvements. I’ve always seen you guys as early adopters of new processes and tech.”

The duo went on to detail what has made this buyer-LSP partnership last for many years. In a nutshell, LSPs should learn how to speak the language of KPIs.

“When you talk to sales executives, they don’t care about turnaround time and cost per word. What they care about is revenue, margin, and total addressable market,” Bourland said.

Dell’s Translation Director added, “When you talk to someone on the web or digital side, they talk about SEO or conversion rates. On the services side, it would be how to move someone from needing to call in for support to being able to self-solve online. So you really have to talk in a language that’s important to them and about the KPIs that matter to them.”

Goble remarked, “That’s powerful because you’re using their language, not the language of localization metrics.”

“When you talk to sales executives, they don’t care about turnaround time and cost per word. What they care about is revenue, margin, and total addressable market” — Wayne Bourland, Director of Translation, Dell

The result of the Dell-Welocalize partnership has been clear, quantifiable value. Bourland said, “With one product line, we saw an uplift in revenue tied to the fact that the product was internationalized,” which ended up contributing 23% to overall revenue.

“In another product line, we saw a negative 19% contribution — 19% of revenue left on the table just because the product wasn’t internationalized,” he said.

Dell’s Bourland and Welocalize’s Goble went on to talk about the value of using data to measure the business impact of internationalization (i.e., designing software for other regions sans engineering tweaks) and localization (adapting internationalized software for a certain region via translation or other localized components) — and then taking the time to explain that impact to internal stakeholders.

Bourland pointed out, “In any company of Dell’s size, where you have multiple acquisitions over the years, you have people that are at different maturity levels from an internationalization standpoint.”

He noted how, to this day, some stakeholders only view translation as a cost center, not a revenue driver: “There has always been this misconception that everyone at a data center speaks English and we don’t have to worry too much about localizing our products. And that’s obviously not the case. Certainly, it is less and less the case every day.”

Thus, it is up to the buyer-LSP partnership to gather data and present it in such a way that shows ROI versus spend.

Goble explained, “I could see a couple of directions here. One is the data is clearly articulating a need to grow your budget. The second is it gives you a framework that you can apply to your existing budget to get the best ROI within that limited spend.”

The pair agreed that, sometimes, it does not necessarily mean less spend, but delivering a certain amount of savings that enables the internal team to translate more content in a shorter amount of time.

The issue of shorter turnaround times steered the discussion to the use of AI (e.g., natural language processing or NLP tools) in the localization workflow; which can, of course, cut time to market and increase savings, as well as boost customer engagement and scale. (Listen to the full exchange via SlatorCon Remote on demand.)

Goble highlighted a couple of examples of where AI can be deployed and, during the open forum, a question arose on the role humans play in the last stage of the localization workflow: quality assurance or LQA.

For his part, Bourland said, “We’re still gonna need humans to evaluate this stuff and inform us how we can make improvements to AI and NLP in the MT space. I don’t see that changing in the near term.”