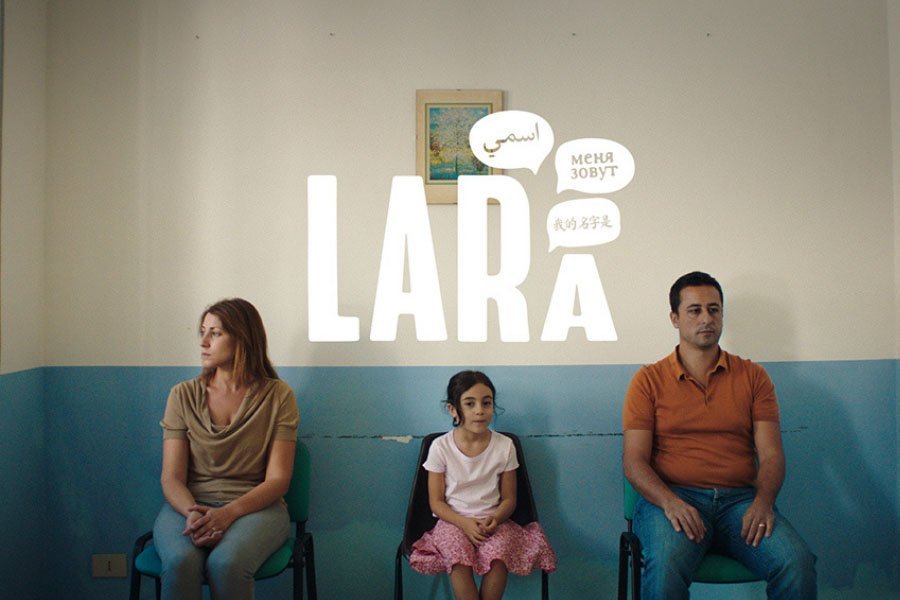 The film opens with a wide shot of twin dusky promontories, a little town tucked into the distant vale. This is Salina, a small island off the Sicilian coast and the setting for the story of a young Italian girl with a unique gift, Lara. The film is the creation of Rome-based language service provider (LSP), Translated.

Lara can speak all languages of the world. The story begins with Lara as a toddler being prompted, as doting parents are wont to do, to say “father” and “mother.” Rather than speaking Italian, she says the words in English (daddy) and Filipino (nanay). Vignettes of Lara’s journey to young adulthood follow as she fascinates and helps the townsfolk with her rare talent.

She interprets for tourists and helps translate the foreign instructions on a newly delivered treadmill. (Check out the hilarious scene of neighbors lugging the treadmill to Lara’s home and her parents patiently looking on as she explains how to work the console.)

No matter the time of day, Lara is ready to help. At one point, Lara even serves as the live simultaneous interpreter of a Dutch film playing at her town’s movie house!

“Rather than a commercial about Translated’s services, we decided to make a film that shows the values and characteristics of the linguists we work with,” Daniele Patrioli, VP of Marketing at Translated, told Slator.

He said Lara personifies the simplicity, helpfulness, hardworking nature, and amazing skills of the industry’s translators and interpreters — and that the industry is happy to serve 24 by 7. (The treadmill couple actually called on Lara late in the evening after she had gone to bed!)

While foreign brands, from fashion houses to laptop makers, have long ago hired award-winning film directors and producers to create branded content, Lara is a breakthrough in the language industry. For one, it is a short film, not a commercial. What’s more, a professional filmmaking team was tasked with bringing the fictional heroine to life.

Lara is helmed by Koen Mortier, an award-winning film director and producer who has been recognized at several international film festivals (Cannes, Rotterdam, etc.). The score was written and produced by multi-awarded composer Michele Braga and TV and film soundtrack composer Emanuele Bossi. Accompanying the duo on the original score are musicians who were part of an internationally renowned orchestra.

How the Multilingual Heroine Came to Life

The short film was shot over four days during a break in the Covid lockdown. The setting, the southern Italian island of Salina, north of Sicily, has less than 3,000 residents. It is typical of a small Italian coastal town: rural, some faded stucco, very picturesque.

Translated worked with Milan-based creative agency, Auge, on the film’s concept. The actors, mostly locals, appeared on film for the very first time; a school teacher took on the role of psychologist, Salina’s pharmacist played a doctor, and so on.

Lara, at different stages in her life, was played by five girls making their acting debut: Nicole, Manila, Miranda, Clarissa, and Francesca. According to a company press statement, finding locals willing to act on film was the easy part — “but finding a treadmill on the island was hard work.”

The same statement said, “After 20 years in the translation business, we felt it was time to create an unprecedented story illustrating the wonders of language. This project represents the values that make us who we are. More importantly, it is a gift to all the people working in the translation industry who strive tirelessly to provide the services and tools that make our lives easier and allow us to communicate meaningfully in any language.”

The final scene shows several townsfolk lined up outside Lara’s home after sunset, each one carrying something: a toolkit, a small appliance, an electronic device, a book, etc. Lara welcomes them with a small smile and a “Buonasera. Chi è il primo?” (Good evening. Who’s first?)

While the story of Lara is clearly fiction, Translated brings what she does to life every single day.