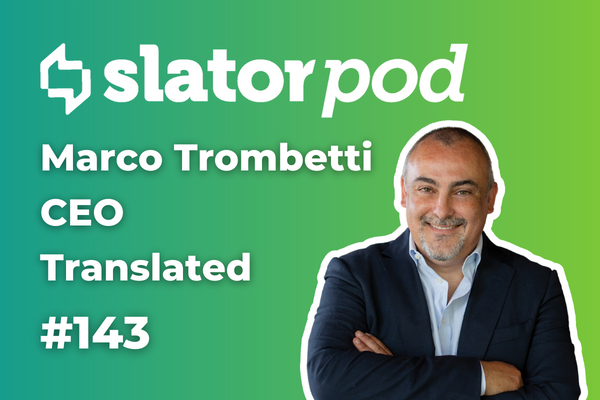 In the final SlatorPod episode of 2022, we are joined by Marco Trombetti, cofounder and CEO of Italy-based LSP Translated. Marco joins us two years on from our episode with Translated’s other cofounder, Isabelle Andrieu.

Marco breaks down the LSP’s Singularity in AI research project and defines what singularity means in translation. He walks us through the process and the vast data collection effort behind the research, with “time to edit” emerging as the key performance indicator for machine translation quality.

He talks about whether Translated has reached a plateau of productivity in postediting and the challenges of building a user interface for interacting with natural language. He also gives his take on the importance of owning an adaptive solution for machine translation like ModernMT.

Marco shares Translated’s approach to working with some of the world’s biggest companies such as Airbnb. He explains how they see financing as a requirement to reach their goals — which eventually fuelled their decision to secure USD 25m in growth equity.

The CEO shares his thoughts on ChatGPT. He thinks big language models will be the future of search and natural language will become the primary way of interacting.

Initiatives such as participating in the Ocean Globe Race 2023, the Imminent research center, and Pi Campus are all central to spreading their values and creating an innovative community, Marco concludes.