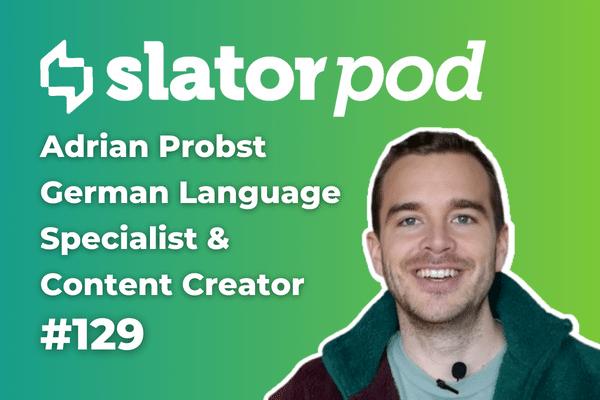 Adrian Probst, German Language Specialist and Content Creator behind the YouTube channel Freelanceverse, joins the pod this week to talk about how he became arguably the most successful YouTuber in the language industry.

The YouTuber looks back on his journey; from commercial apprenticeship and studying translation at university to working as project manager and branching off on his own as a freelancer. He recalls how he began his YouTube channel as a way to challenge himself during the pandemic, and how consistency and authenticity has allowed his channel to grow to over 16,000 subscribers.

Adrian highlights the importance of online visibility and networking as a way to find and secure new clients directly. He reveals how he bases some of his videos on frequently asked questions from the community, such as pricing translation and the future of machine translation.

The pod rounds off with Adrian’s view on YouTube giving multilingual audio tracks to its top creators — and how his offering multilingual subtitles caused his videos to spike in views. He encourages students not to wait until they graduate to attend language industry events, do some voluntary translation, and build a network.

First up, Florian rehashes some of the biggest stories of the past four months as co-host Esther returns. Back in May 2022, RWS and Baring Private Equity Asia Fund VIII Limited confirmed that Baring would not proceed with a takeover bid for RWS.

Next, there was some major pushback against RSI over the summer as UN interpreters blamed technology for the decline in their working conditions; and EU interpreters voted unanimously to suspend remote interpreting services.

More recently, YouTube has been testing a new multi-language audio feature with a small group of popular creators. Esther breaks down the different language industry companies that made the Inc. 5000 list of fastest-growing, US-based businesses in 2022.