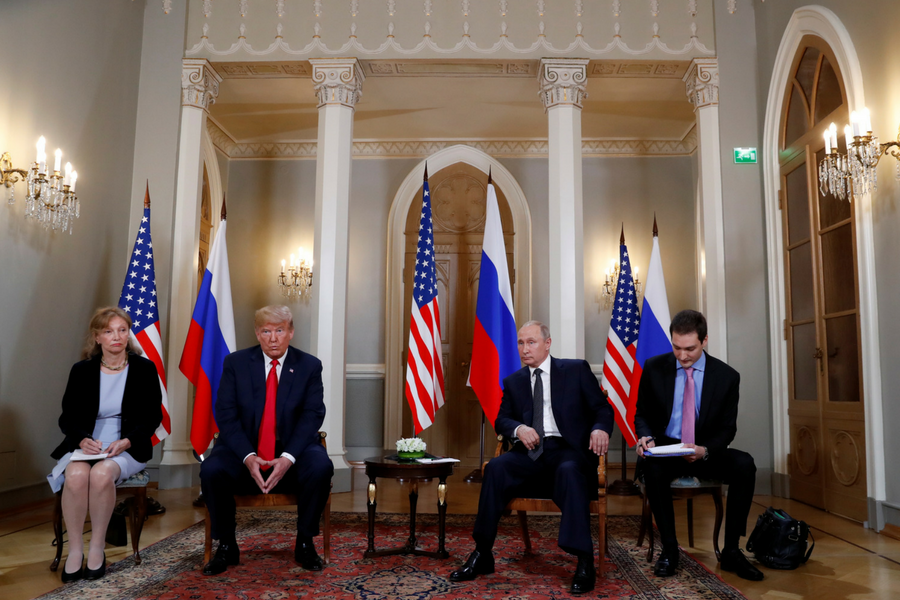 A US State Department interpreter has found herself swept up in the global news cycle, as the media and the US public wonder what was discussed in a private meeting between US President Donald Trump and his Russian counterpart Vladimir Putin on Monday July 16, 2018.

In the wake of a highly controversial press conference, the world’s attention quickly shifted to interpreter Marina Gross, the only other American present in the room, and therefore the only one (aside from Putin’s own interpreter) who also knows what was discussed by the presidents behind closed doors.

Very little is known about Gross with most news outlets only highlighting her appearance in a 2017 meeting in Russia and circulating a picture where she is seen next to former First Lady Laura Bush at the 2014 Winter Olympics in Sochi.

Gross is an employee of the State Department’s Language Services Office (LS). According to its website, the office employs “approximately 20 direct-hire diplomatic/conference interpreters working in a dozen languages and 12 direct-hire diplomatic translators who work in about 15 different language pairs.”

According to the LS, interpreters are “carefully selected, rigorously tested and trained to be the voice and ears of U.S. interlocutors as they represent U.S. government interests by addressing foreign audiences, participating in international conferences, holding discussions with foreign counterparts, negotiating treaties and taking part in any activity where language would otherwise be a barrier to communication.”

Since the Monday meeting, pressure has been building, with leading Democrats calling on the House Oversight Committee to ask Gross to answer questions about what was said in the meeting.

I’m calling for a hearing with the U.S. interpreter who was present during President Trump’s meeting with Putin to uncover what they discussed privately. This interpreter can help determine what @POTUS shared/promised Putin on our behalf.

This is perhaps the most direct political pressure any interpreter has ever faced to break confidentiality, a concept that is firmly at the heart of the interpreter profession.

Indeed, confidentiality clauses are written into many of the profession’s codes of ethics, including those of the California Healthcare Interpreting Association, the International Medical Interpreters Association and the UK’s National Register of Public Service Interpreting (NRPSI).

The Executive Committee of the International Association of Conference Interpreters (AIIC) today released a statement, which points to its own Code of Professional Ethics and says that the “cardinal principle applied worldwide since WWII [is] that interpreters should never be obliged to give testimony.”

Troublesome Terps, a group of professional interpreters whose podcast focuses on “the things that keep interpreters up at night,” told Slator how they see the role of secrecy and confidentiality in the profession:

“Interpreters take professional secrecy and confidentiality very seriously. Our role makes it essential not to betray the trust of the people we work for. Professional associations have strict codes of conduct in place for their members which forbid the sharing of privileged information.”

“In addition, interpreters working at high-level political meetings or other highly confidential gatherings, may have to undergo additional security checks or sign non-disclosure agreements with their client. Luckily, it is rare that interpreters find themselves as exposed as in this current situation.”

In the event that Gross declines to answer questions voluntarily, Democrat Congressman for New Jersey’s 9th District Bill Pascrell and others have urged the Chairman of the House Committee on Oversight and Government Reform to subpoena her. This would be an unprecedented move. According to CNN, “no one can remember a situation where a government interpreter has been asked to testify before Congress.”

“If you get subpoenaed by Congress, I don’t think there would be any code of ethics that would supersede that obligation” – Judy Jenner

Judy Jenner, co-founder of Twin Translations and ATA spokesperson, told CNN that “when in doubt, we keep it confidential. Unless a judge orders me to talk about it I probably wouldn’t. And this is a legal issue not so much an interpreting issue. If you get subpoenaed by Congress, I don’t think there would be any code of ethics that would supersede that obligation.”

Upon news of a possible subpoena, a number of interpreters have taken to Twitter, with Barry S. Olsen, Professor of Interpreting and Conference Interpreter, calling the situation a “can of worms”. Others have also come out in support for Gross, encouraging the interpreting community to rally round one of its own.

Despite the media frenzy, Democrats will find it challenging to secure the subpoena they seek unless they can convince any of the Republicans in the majority to cross to their side, which seems unlikely in this politically charged environment.

Editor’s note: An earlier version of this article identified Bill Pascrell as a Senator. It has been since corrected to Congressman for New Jersey’s 9th District.