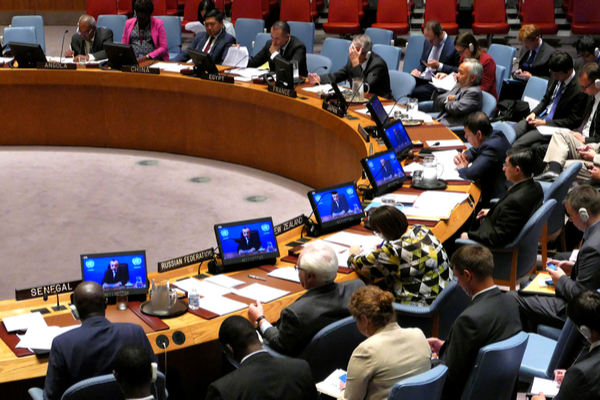 The United Nations has published a recruitment call for the position of Chief Interpreter at its headquarters in New York. The last date to apply is June 21, 2019.

The Chief Interpreter will head the United Nations Interpretation Service, whose core function is to provide simultaneous interpreting from and into the six official languages of the UN: Arabic, Chinese, English, French, Russian, and Spanish.

The person will report to the head of the Meetings and Publishing Division (MPD), Department for General Assembly and Conference Management. Compensation is in the D1 category, indicating a salary of around USD 200,000 give or take composed of a base salary and a variable component.

Furthermore, the Chief Interpreter will manage the day-to-day operations of the Interpreting Service, hire staff, and forecast and strive to meet the long-term needs of the organization, among other things. The current Chief Interpreter is Hossam Fahr, who was formerly the Chief of the Arabic Interpretation Section.

The Interpreting Service employs upwards of 100 interpreters and also commissions freelancers from time to time. A typical team for a six-language meeting at the UN requires 14 interpreters: three per booth for Arabic and Chinese, as those interpreters work both from and into those languages, and two each for English, French, Russian, and Spanish. In a UN video, Chief Interpreter Fahr puts the average number of weekly meetings where interpreting services are required at 80–90.

Massive events, such as the plenary session of the General Assembly, may be attended by members who do not speak any of the six official UN languages. Delegates who opt to speak in their language must be accompanied by their own interpreter, who then has to relay the speech into a UN language. The speech will then be further interpreted into the other UN languages. Such events usually require more than 100 interpreters, many of whom are freelancers with some assigned by other UN offices.

Hat tip to Ewandro Magalhaes from KUDO, who first posted about this opening on LinkedIn.