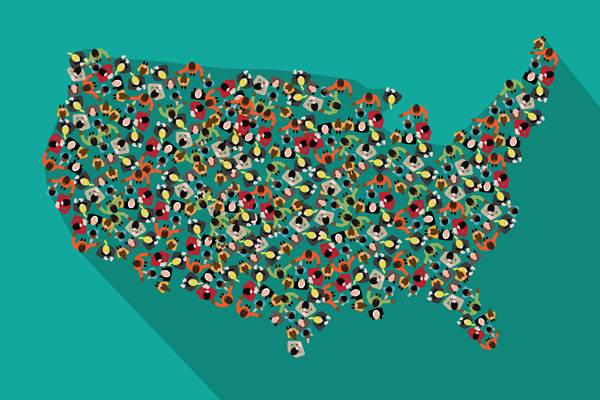 The US Census Bureau has started collecting data on Haitian and four Indic languages – Bengali, Tamil, Punjabi, and Telugu.

For the first time, data on the number of people who speak these languages and where they lived in the country between 2012 and 2016 were included in the American Community Survey (ACS) report released on December 7. Previously, these languages were grouped only under “French Creole,” “Other Indic languages” or “Other Asian languages,” according to the Bureau.

David Waddington, Chief of the Social, Economic, and Housing Statistics Division, was quoted in a news release as saying that these estimates help people, businesses, and governments throughout the country better understand the needs of their populations.

The move underscores the growing importance of Indic languages in the US. In July, the New York City government has expanded access to public documents in four additional languages – Arabic, French, Urdu, and Polish – because the data supports that it would benefit more citizens with limited English proficiency (LEP).

Of the four Indic languages now being tracked by ACS, Telugu has the most number of speakers at 321,695. Around 20.7% or 66,764 do not speak English “very well.” The US Census has a standard measure of English-speaking ability.


Telugu is the third most spoken language in India, according to Indian Census Data. It is spoken mostly in the country’s south-central part, and mainly in the state of Andhra Pradesh. In the US, Telugu speakers, as the graph below shows, are concentrated in Illinois and its neighboring states (5% or more of the population). However, people speaking Telugu at home were more evenly distributed across many parts of the nation.

In March 2017, Slator reported that a USD 1.5m website translation initiative was shot down by the Illinois State Legislature, citing the cost efficiency of using Google Translate versus a professionally translated government website.

In other parts of the country, however, local governments are making the move to expand language access, especially in the legal and medical fields to benefit LEP individuals.

Bengali comes in second with 295,204 speakers in the US. Around 123,067 or 41%  do not speak English “very well.” It is the second most widely spoken in India, next to Hindi. Bengali speakers are not concentrated in a particular region, but were more widespread throughout the country.

In the US, 38.6% of Bengali speakers lived in New York. In fact, Bengali is already one of the 10 languages supported by the New York City government. But as this graph shows, many Bengali speakers were also concentrated mostly in Michigan and parts of Pennsylvania and Connecticut (2.5% or more of the population).

Tamil has 238,699 speakers in the US, with18.3% or approximately 43,695 not being able to speak English “very well.” Mainly spoken in South India, Tamil is also widely used in the Anuradhapura district of Sri Lanka.

In the US, Tamil speakers were more evenly distributed across many parts of the nation, but a higher number (2.5% or more of the population) were in Louisiana, Illinois, and parts of Ohio and Kentucky.

The 2016 ACS statistics now list 42 languages and language groupings. The US Census said its data trove helps determine “how more than USD 675bn of federal funding are spent on infrastructure and services, from highways to schools to hospitals.”