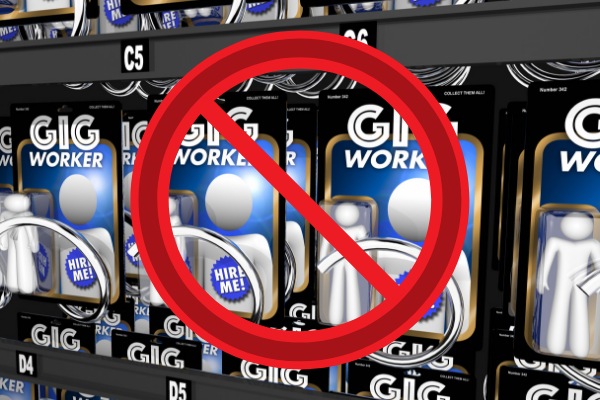 On August 12, 2019, the California State Legislature held a committee hearing on a bill that seeks to require employers to meet the ABC Test for their independent contractors to be lawfully classified as such.

The bill, “Worker status: employees and independent contractors,” which goes by its number AB5, basically codifies or clarifies the Dynamex decision in its definition of an independent contractor. It also expands the reach of Dynamex to include unemployment insurance and other protections under US labor law. (The California Supreme Court’s landmark decision, which concluded that courier service Dynamex misclassified its workers as independent contractors when they should have been employees, has been the subject of much debate.)

AB5 has been through several iterations since it was first presented to the California State Assembly in December 2018. The current version of AB5 exempts a number of professions from the Dynamex decision, including insurance agents, doctors, and hairdressers. In its current form, AB5 does not exempt translators and interpreters.

Such a bill being enacted into California law is, understandably, of great concern to translators and interpreters, representatives of whom were given 30 seconds each to weigh in on the matter at the August 12 committee hearing.

In a summary of proceedings, sent via email and seen by Slator, professional conference interpreter Michèle Stevens said she used her 30 seconds to deliver a petition signed by close to 2,500 translators and interpreters “supporting AB5 with an exemption for interpreters and translators.” Stevens is named author of the petition that has logged over 3,700 signatures on Change.org as of press time.

Reading from the petition, Stevens told the committee: “We are not the ‘gig economy’ workers AB5 is designed to protect, but rather highly trained and skilled professionals with established professional standards to adequately perform our work. We have been working as independent contractors in our industry for 50+ years.”

She went on to say that most of the petitioners belong to international and national professional associations, are government-certified, operate as true entities (i.e., corporations, LLCs, sole proprietorships), have business licenses, and “promote ourselves publicly and work in a business-to-business capacity.”

Stevens is a member of the International Association of Conference Interpreters (AIIC) and the Association of Independent Judicial Interpreters in California (AIJIC). Both AIIC and AIJIC support the AB5 exemption for interpreters and translators. AIJIC Treasurer and Secretary Jesús Rivera and member Patsy Hyatt represented their group at the hearing and requested that language professionals be exempt from AB5, according to Stevens’ emailed summary.

Stevens is also a member of a third group, the California Federation of Interpreters (CFI), which supports the current version of AB5. Sources close to the matter confirmed to Slator that CFI as well as the Interpreters Guild of America (IGA) have opposed the request to add translators and interpreters to the list of professions exempt under AB5. Slator contacted CFI and IGA for comment, but received no reply at press time.

Implications of AB5 for Associations

“We are not ‘gig workers’ we are language professionals,” wrote Barry Slaughter Olsen and Katherine Allen in an InterpretAmerica statement seen by Slator.

In their blog, Olsen and Allen explained the implications of AB5 were it to be enacted into law: “Put simply, any California-based interpreter or translator or any interpreter or translator performing work in the state of California wishing to not be classified as an employee of every single language service company they work for in the state would be required to incorporate as a business and be subject to all laws, regulations and reporting requirements affecting California corporations.” They also note the “undue and onerous financial, administrative and reporting burdens” of “forcing individuals to act as corporations.”

In a statement, the International Association of Conference Interpreters (AIIC), pointed out the impact on the competitiveness of translators and interpreters: “We choose this [independent contractor] status out of a business necessity. If this freedom is curtailed and we are forced to become employees, our competitiveness will be drastically reduced, possibly beyond repair.”

Meanwhile, the American Translators Association (ATA) pointed out that the Dynamex decision “does not apply to the majority of ATA’s independent-contractor members, who have chosen to provide professional freelance services”; and that “the current version of AB5 threatens their very livelihood, since each California-based language service provider would be required to treat these professionals as employees, even though they render services to multiple clients as independent contractors.”

The California State Legislature has added AB5 to its so-called “suspense file” (i.e., the holding place for bills so each House can evaluate their fiscal impact). According to an AIJIC statement sent Slator, the State Senate is scheduled to vote on all suspense files between August 30 and September 12.

We will continue to monitor AB5 as it makes its way to the California State Senate for a vote.