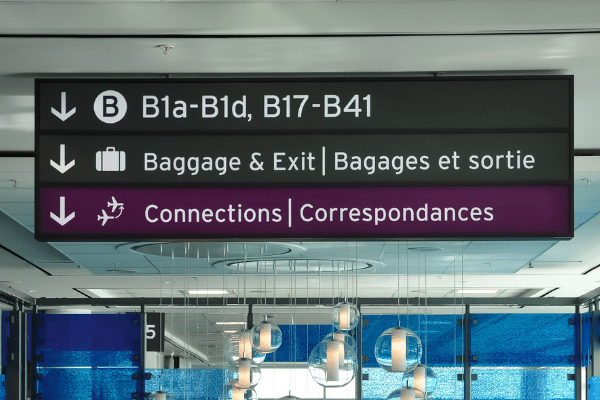 When Michel Thibodeau visited the website of Canada’s St. John’s International Airport (SJIA) in 2018, he noticed that some, but not all, English content was provided in French. He also noted that the airport’s press releases, annual reports, and social media feeds were exclusively in English.

On April 21, 2022, Canada’s Federal Court issued two rulings, finding that the airports, by failing to provide online communication in French, had violated the Official Languages Act. Judge Sébastien Grammond ordered the airports to pay the claimant combined costs and damages in the amount of almost CAD 20,000.

Canada’s international airports and all its federal institutions must actively offer services to the public in both of the country’s official languages, English and French, according to the Official Languages Act. The traveling public is particularly singled out as having the right to obtain service in either language.

What makes the case even more interesting, Thibodeau had never, in fact, visited either airport. He had completed his research via the Internet from his residence in Ottawa. This, argued SJIA, meant that Thibodeau did not belong to the traveling public.

The court disagreed. In a clarification of the term “traveling public,” Judge Grammond said that it encompassed not only people with a travel booking, but any individual using airport services –– for example, to plan a trip, pick up an airport passenger, or enjoy a coffee at an airport cafe.

Edmonton Airport took a different tack. Yes, it conceded, it had breached the Act by failing to publish its entire website in French and using unilingual English slogans inside the airport.

However, Edmonton claimed, Thibodeau was a “serial complainant” who devoted much of his time to “filing complaints and earning a considerable income from the activity.” Thibodeau’s modus operandi, they claimed, was a “commodification” of language rights.

Again, the court saw it differently. “I have no doubt that Mr. Thibodeau is motivated by his deep commitment to the defense of French and language rights,” said Judge Grammond in the ruling, citing Thibodeau’s description of himself as an “ardent defender of language rights.”

While Thibodeau had not suffered any personal loss, the court concluded that the award of damages was appropriate as a deterrent to other institutions ignoring their language duties. The judge ordered St. John’s to pay damages of CAD 5,000 and costs of CAD 6,000, while Edmonton was ordered to pay CAD 5,000 in damages and CAD 3,900 in costs.

The court’s decision was welcomed by Canadian Commissioner of Official Languages, Raymond Théberge, who had appeared as an intervener in the St. John’s case.

“I’m very pleased with the Federal Court’s decision, he tweeted. “The Court has clarified, once and for all, the language obligations of airports and airport authorities under the #OfficialLanguages Act when they communicate with the public.”

So what did the general public make of the ruling? The comments section of the CBC news coverage showed mixed reactions — from the cynical, to the assuaged, to the truly exasperated.

“Defending language rights is one thing but this guy is turning it into his job and making a profit. That should not be allowed,” said one comment. Another agreed: “It’s a cash cow for some to go around trying to find where the federal language laws are broken.”

“We have some bizarre laws in this country,” commented one Canadian. “This is most assuredly one of them.”

Others approved the rulings. “Good job. This is an officially bilingual country so why not follow the rules,” said one. “I’m proud of [the complainant] for making sure the laws of the land are adhered to,” agreed another.

Noting the negative reactions to the award of damages to Thibodeau, one commenter had a novel explanation: “You are just mad that you never thought of it first. You snooze, you lose.”

One commenter has this fun idea: “Suggestion. Just stop talking. Use emojis for all communications. Then nobody’s offended.”

Further discussion of Canada’s language laws is guaranteed in the coming months. A new bill to modernize the 50-year-old Official Languages Act has been tabled in parliament.

The Office of the Commissioner of Official Languages (OCOL) has put forward 18 recommendations to achieve a more “holistic approach” and provide more guidance to federal institutions.

The OCOL conceded that linguistic duality “has not always been something on which Canadians have agreed.” However, it hopes that modernizing the act will “breathe new life into linguistic duality, both to preserve its gains and to ensure its continued growth.”