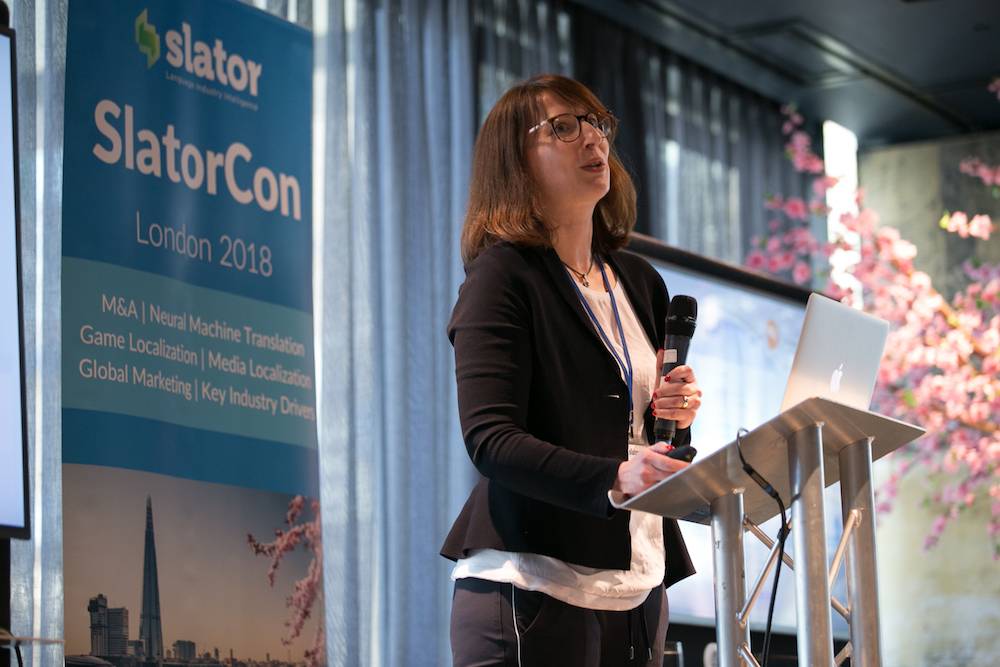 Game localization is one of the language industry’s most exciting areas. And this year’s SlatorCon London, held at Nobu Hotel Shoreditch on May 17, 2018, featured the localization head for one of the largest game companies in the world.

Michaela Bartelt-Krantz, Senior Localization Director at Electronic Arts (EA), talked about What’s Next in Game Localization. Her company, EA, is one of the biggest players in the games industry. The company’s preliminary financial results for its fourth fiscal quarter and fiscal year ended March 31, 2018 showed 17% year-on-year growth to USD 3.5bn in revenue.

EA is also responsible for some of the biggest games today, such as Battlefield 1, Star Wars Battlefront II, the FIFA series currently at FIFA 18, The Sims series, the Need for Speed series, and the Mass Effect series, and many more.

A Supply Chain That is “More in a Circle”

Bartelt’s presentation briefly touched on the complex subject of their supply chain. She explained that “it used to be a linear process, we try to arrange it here a little bit more in a circle,” referencing a slide with process steps arranged into a circle—from long-term strategic demand and language planning to development to game design to live content.

“In fact, in today’s world, with live services content, everything is happening at the same time, simultaneously,” she added.

Indeed, the slide featured language planning right next to long-term strategic demand, at the “beginning” of the circle. She explained that EA uses market potential and, increasingly, player engagement to determine into which languages a game is localized.

“We capture player telemetry: what are people doing with our games, which languages are they playing the games in if they’re available, how do they engage?” she explained.

Bartelt added that real world events also play a role, citing their FIFA World Cup game as an example: “there was a bit of a conversation about [whether we] should localize the World Cup extension into Italian because they didn’t qualify [in the recent real World Cup].” In the end the game was available in Italian, as “obviously Italian is a very important language for us,” Bartelt said.

Bartelt also explained that EA’s own localization infrastructure is fairly mature, and said it was even the envy of others in the game localization space. “It’s a good thing because we want to automate the content flow from the various Content Management Systems at our development studios and the various game engines through the localization process,” she said. “We want to automate that as much as possible and we’re doing that now with the help of our engineering team.”

The actual translation, however, is not automated. Bartelt revealed that they mainly work with freelancers and single language vendors (SLVs) “wherever possible.”

“We have long-standing relationships with most of our vendors [and] freelancers,” she said. “They understand our franchises and that enables them to deliver the quality…, engagement and flexibility that we need from them.” Bartelt added that it was the same when it came to speech and voice-over recordings, though these need to be done in-country, “especially when you’re working with VIP Talent.”

During the panel discussion towards the end of SlatorCon, Bartelt was asked about top management pushing back against their direct freelancer and SLV relationships, seeing as outsourcing en masse to a single multi-language vendor, for example, might offer a lower cost base.

Bartelt observed that the EA setup is “considered a competitive advantage,” saying that the quality of localization they put out is a selling point for their partners since EA acts like a game publisher and localizer in one. “It doesn’t mean that there is never push back. We have a high fixed cost there for EA,” she admitted, “But we have managed to position ourselves in a positive light, I would say.”

“We function as an internal multilingual vendor”

When another audience member asked whether EA reviews this procurement strategy regularly, Bartelt confirmed that while these direct relationships are “ingrained in [their] operations,” they do review their setup and costs on an annual basis.

“The unit cost that we as an entity produce for our internal partners,” Bartelt specified, “So that is something we keep an eye on. The service quality we can deliver internally and in general the quality of the output.”

She later added: “We function as an internal multilingual vendor. Excellent for exclusivity.”

What’s Next in Game Localization?

“Today we are live. All our franchises are live,” Bartelt explained. She was referring to “live content,” which is a bundle that includes the game itself, player messaging, marketing and advertising, downloadable content and updates, and title websites, among others. “All the games are played online. We have continuous content flowing and we believe that that will be accelerating vastly going forward.”

She added that their franchises have persistent universes that can potentially span decades. This means, however, that game content will need to be delivered increasingly faster. “We might have the capability to do daily updates even for console games. So that will vastly accelerate what we have to do on our side, in parallel,” Bartelt said. “Our players will want to engage socially; maybe we want to enable them to create content for the game that will then be published globally.”

Bartelt said they expect the future to be real-time localization: “I think we will experience this in our lifetimes,” she said. She also predicted that neural machine translation (NMT), which is already “very, very promising,” will only develop further in the future.

Then Bartelt pointed out how automated voice generation, while still science fiction today, could be the answer to the costly and time-consuming process of dubbing and voice-over today. “What if we could use synthetic voices in the future? What if we could automatically generate voices?”, Bartelt asked the audience. “Quality is incredibly important, but I believe we will see synthetic voices increasing in quality also within our lifetime.”

During the open panel at the event, Bartelt addressed a question from the audience about how close she thinks the industry is to high quality synthetic voice generation. “It [already] exists, but it’s very curated,” Bartelt answered, referencing the recent video of  synthetic speech generation from voice samples, such as former US president Barack Obama.

“There are a lot of questions—legal questions—but [also] questions for us as a society that we need to answer. How do we want to deal with those opportunities?”, Bartelt noted. “I’d be concerned if I can record five minutes of your voice and make you say anything and send that, you know, to your wife,” she said to the laughter of the audience.

The final part of her vision of the future of game localization is automated testing. Today, EA needs native language testers to guarantee cultural relevance, though they are already experimenting with some form of automated testing setup.

“One thing that we are experimenting with is, for example, to run a farm of PlayStations and capture video of—going back to FIFA—all the corner kicks in Italian for whoever’s interested,” she said. “Then on the next day or after a night of playing in that PlayStation farm, our tester could come in and just watch the video of all the corner kicks and make sure that the audio fits the context and so on.”

As for testing aspects of the gameplay like player behavior, Bartelt said they needed to invest in data analytics on that front.

Finally, Bartelt highlighted that EA is not doing all this alone—they need and value their partnerships. “We are engaging deeply with the localization industry. That is a staple of our success,” she said.

For her vision of the future of game localization with NMT, voice generation, and automated testing, however, Bartelt said that the industry needs a push to experiment and make it a reality for creative content.

“So we will have to find a different level of engagement with the industry and find partners that are willing to go on that adventure with us together.”

Join the executive discussion and register early for SlatorCon San Francisco to meet who’s who in the language industry: