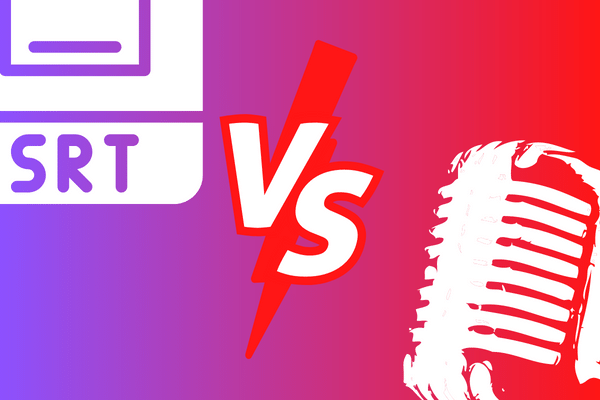 “The system was born in a Chicago courtroom in the early forties. Its father was a pen shorthand reporter and its mother frustration,” wrote Horace Webb. A court reporter, Webb was referring to the technique he invented, stenomasking, upon which voice writing is based.

Voice writing, also known as respeaking, is one way to produce text for multilingual subtitles in a short amount of time. The rise in interest around subtitling techniques, to paraphrase Webb, has as its father burgeoning demand and its mother a talent shortage.

Also in high demand, dubbing. The latest (potentially) from YouTube, which has been quietly testing multi-language audio (Subscriber Content) that would open up a massive new market for professional dubbing if rolled out across the platform.

But subtitling trumped dubbing in a recent Slator poll in terms of which service readers think shows the most growth potential. (An earlier poll showed that as many as 8 in 10 readers keep subtitles on even when watching content in a language they understand.)

Most readers said Multilingual Subtitling (60%) offered more growth versus Dubbing (7.3%). The rest said that Captioning (18.2%) and Transcription (14.5%) showed the most promise.

Still in the content localization milieu, machine dubbing has also gained some traction in terms of uptake and funding. (The founder of one AI dubbing startup, Dubverse, weighed in on YouTubers and TikTokers using the tech in a July SlatorPod episode.)

Going by Slator’s evolving coverage, one could track the transition of translation gadgets from the fringes back in 2017 to mainstream use, including via the government. And while the most popular translation app is deemed by some sectors as being not yet ready for use during emergencies, even authorities acknowledge that it is “useful.”

So useful, in fact, that both the UK and the US governments have begun drafting official policies around translation devices and machine translation (MT) output. Earlier in August, a US health agency outlined how MT output may be used in healthcare settings. In July, the UK issued immigration guidelines suggesting cases where staff might use a translation device instead of an interpreter. Both instances, however, came with several admonitions.

Getting Any Job Offers?

When Slator parsed more than two dozen job ads for leaders of localization departments on the buy side, we discovered some interesting things about the language industry labor market (Subscriber Content). One thing is certain: the language industry is resilient and hiring has continued, albeit with a few ebbs; most notably during the bleakest months of the past couple of years. The industry has, of course, since recovered.

Here’s one good indicator: Slator readers are among those being noticed by hiring companies, with roughly half saying they are contacted by recruiters a Couple of times a month (22%) or All the time (20.3%).

However, a significant number also said they were Rarely (45.8%) or Never (11.9%) contacted by recruiters. There’s really no reason to wait though. Head on over to LocJobs.com where there are dozens of opportunities, mostly for full-time roles.