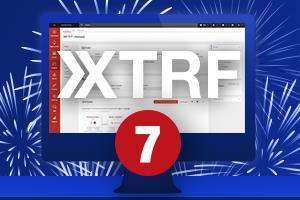 XTRF has released version 7.0 of its translation management system based on JAVA 8, making it the most secure XTRF version. Security has not been the only priority for this release, but also system stability and continued flexibility as well as further efficiency grinding for Smart Projects. XTRF 7 shows the company’s continued commitment to providing a versatile solution for different approaches to project management with smarter workflow automation.

In response to the growing necessity for a translation management system to be pen-test proof, XTRF has decided to change the technology underlying the whole system. Java 8 is significantly more secure than its preceding version, which is no longer supported. The introduction of newer technology has not only made the system more secure and stable, but has also improved its efficiency. Performance was further optimized in the area of integrated systems. From memoQ and Memsource to QuickBooks Online, many fixes and improvements were introduced. The same goes for the REST-API that was updated with several new methods.

In order to further improve security, XTRF has made a decision to stop support for FTP and fully switch to SFTP. Since FTP is considered insecure (no SSL support) and requires dedicated software, XTRF now offers a much more secure and powerful browser-based solution for both the Vendor Portal and Client Portal. For this same reason, insecure HTTP access is no longer supported. A global standard is to use the more secure HTTPS protocol for any website and gradually remove support for insecure HTTP. Vulnerable information (secrets, user passwords, translation files, financial reports etc.) should not be transferred unencrypted over a network (especially a wireless one). XTRF has supported HTTPS for a long time and the drop of HTTP support is a move towards increased security of all client data.

XTRF is integrated with the European Central Bank and supports about 30 of the most popular currencies and their exchange rates. With the growth of the industry, the need for a translation management system is becoming more and more visible globally. In order to better respond to this, XTRF has recently integrated with openexchangerates.org to extend its list of supported currencies by a 126. It’s ready to go no matter where you are!

To further expand the use of its system, XTRF has added new custom integrations (some are still considered experimental). The ones becoming available from XTRF 7 allow for posting job offers to ProZ.com, calculating a distance to a job venue based on Google Maps and creating reports in Google Data Studio.

By many in the industry, XTRF is regarded as the most flexible and customizable solution commercially available on the market. To embody that opinion and to give Project Managers even more flexibility, Smart Quotes and Projects now support per‑language custom fields (the equivalent of the task‑level custom fields in Classic Projects).

As a system facilitating communication, templates are one of the fundamental elements of XTRF. These have been further improved by adding more placeholders in email templates for Smart Projects. This will take the flexibility of email notifications to a new level. Users will now be able to refer to jobs, instructions, notes, volume, totals, client and project name in their email notifications for Smart Projects. Not only that. The default templates for Email Themes, PDF Documents and Reports have also been improved to allow new users to get a head start with good and better looking defaults on their new instance.

What has already been noted and appreciated by the more advanced and demanding users is the introduction of Groovy for XTRF custom scripts and custom columns. That’s another move aimed at increasing XTRF customization possibilities.

For further information on XTRF and its latest release, please contact us: