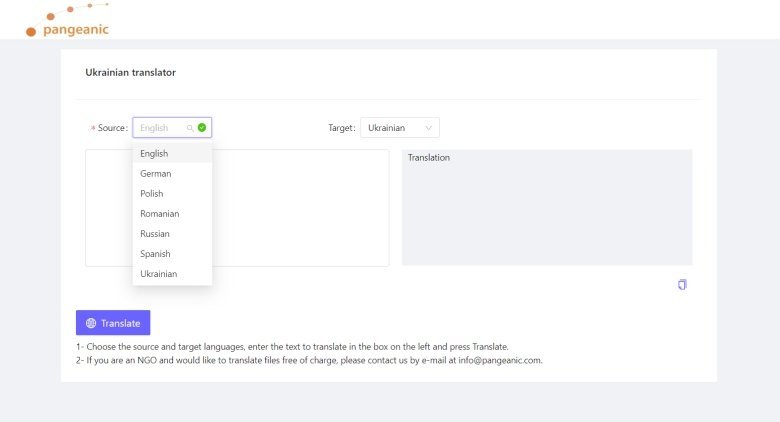 Over 5M people have left the country and more than 7 are displaced. Language assistance is urgently needed.

Valencia, April 26, 2022. Pangeanic is a company that uses Artificial Intelligence to provide language processing services. Amid the chaos of the war in Ukraine, Pangeanic is showing its support to those who are being forced to flee their country. The company has released several of its machine translation engines so that people, businesses or organizations can translate for free using its Ukrainian translation panel. NGO’s and Public Administrations can request free-of-charge access to Pangeanic’s API for full document translation or API connection. So far, the available language pairs include various relevant European languages (such as English, Polish, German, etc.) into Ukrainian or Russian, and vice versa.

We have all been witness of the terrible violation of human rights taking place in Ukraine. Fake news abound. In situations of aggression such as the one being experienced in Ukraine, every contribution is necessary, no matter how small. Pangeanic is proving the strength of machine translation in times like these. In addition to various economic contributions to the International Red Cross, the company has created a free instant translation engine. Access to this service is available to those who are suffering the consequences of the war, as well as public administrations that need to communicate with migrants.

Manuel Herranz, CEO of Pangeanic, explains how the company is committed to doing their bit for Ukrainian citizens in this difficult situation. “We are working hand in hand with the Spanish authorities. People fleeing the war zone should have access to legal information, understand it and rest assured that their data will be safe thanks to our combination of MT and anonymization,” he stated during his participation in the International World AI Festival held in Cannes on April 15.

The translation website provides a text box where users can enter content in different languages and have it translated with a high degree of accuracy. Public Administrations or NGOs that require translation can request this service confidentially through the form on the same page.

Pangeanic began its journey in the language industry as the European agent of BI Corporation, a Japanese group, in 2000. After becoming independent in 2005, it has led and been involved in several national and European R&D programs in the field of computational linguistics, pattern recognition, TM databases, anonymization, Machine Translation, and other NLP areas. It combines Artificial Intelligence with human expertise and knowledge in order to offer high-value services. For example, the company is well-known for leading the MAPA Project, and creating its own data anonymization service to help with GDPR compliance. MAPA is currently used by the Spanish Ministry of Justice, the EU’s DG Translation and the 27 national Complaints Watch offices.

“There is a growing global concern about how personal information is being used for different purposes, including monetization” Manuel also stated in his speech at WAICF, underlining how, among other goals, his company wants to ensure that citizens’ data is safe through its anonymization software.