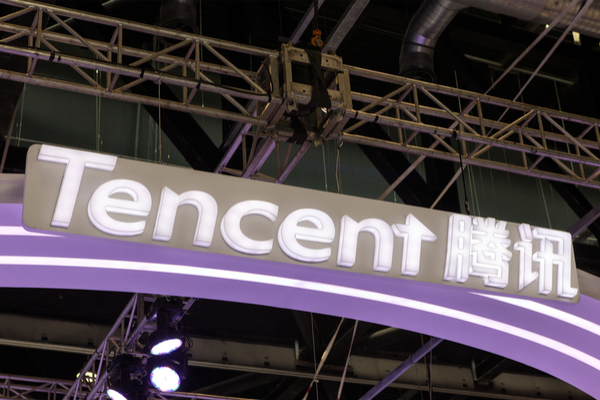 Tencent’s AI powered translation engine, which was supposed to perform simultaneous transcribing and interpreting at China’s Boao Forum for Asia last week, faltered badly and became the brunt of jokes on social media. It even made headlines on the South China Morning Post, Hong Kong’s main English newspaper – which, incidentally, is owned by Tencent’s key rival Alibaba.

The Boao Forum, held in Hainan Province on April 8-11, 2018, is an annual nonprofit event that was started in 2001. Supported by the region’s governments, its purpose is to further progress and economic integration in Asia by bringing together leaders in politics, business and academia for high-end dialogs and networking.

Tencent is one of the tech giants of China, often dubbed the “B.A.T.” (for Baidu, Alibaba, Tencent; sometimes BATX if one includes Xiaomi). Its most well known products include the instant messenger WeChat as well as microblogging site Sina Weibo. Both are everyday apps used by just about all Chinese citizens as well as other ethnic Chinese around the world.

WeChat in China is pretty much an all-round, full service lifestyle mobile app in its local Chinese version. You could do just about anything in it these days – from buying train and movie tickets to making mutual fund investments to ordering groceries or an hourly maid from the neighbourhood.

In 2017, Tencent rolled out an AI powered translation engine called “Fanyijun”, which literally translates to “Mr. Translate”, since the Chinese character for “jun” is a polite, literary term for a male person.

Fanyijun is already in use powering the in-app translator in WeChat as well as available online as a free online service. However, it was supposed to have made a high-profile debut at the Boao Forum together with the Tencents “Zhiling” or literally translated, “Smart Listening” speech recognition engine, showcasing the company’s ability to do real-time transcription and interpreting. In retrospect, it seems the publicity effort has backfired on Tencent.

To be sure, human interpreters were still on hand to do the bulk of the interpreting work during the forum. However, Tencent used its AI engine to power the live translation and broadcast of some of the side conferences to screens next to the stage and for followers of the event within WeChat.

This resulted in many users making screenshots of the embarrassing errors made when the engine frequently went haywire and generated certain words needlessly and repeatedly, as well as getting confused when some speakers spoke in an unstructured manner or used certain terminology wrongly. 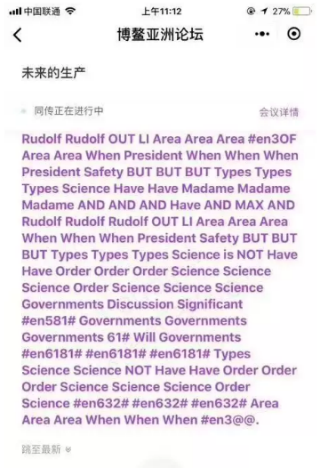 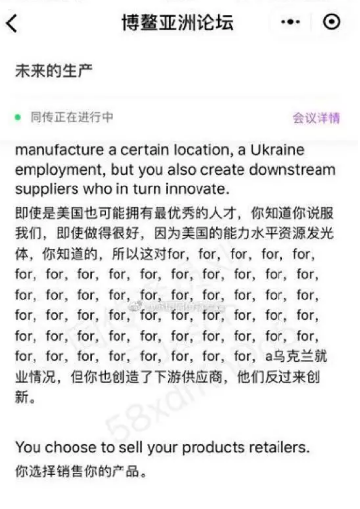 Chinese media cited a Tencent’s spokesperson who admitted that their system “did make errors” and “answered a few questions wrongly”. But he also said in their defense that the Boao Forum was a high-level, multi-faceted, multi-speaker, multi-lingual, discussion based event. That and the fact that the environment was sometimes filled with echo and noise, added to the challenges their system faced.

The gloating hit a crescendo when someone circulated this screenshot from a WeChat group composed of freelance interpreters. It was an urgent request for English simultaneous interpreters to do a live webcast later that day for the Boao Forum. 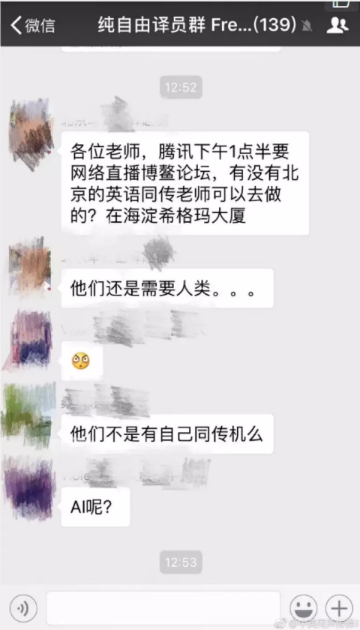 One group member replied, “They still need humans…” Another said, “Don’t they have an interpreter device?” A third sarcastically added, “Where’s the AI?”

Tencent later clarified that this request was meant for engaging interpreters for their professional news team doing live reporting in Beijing, and not for the simultaneous interpreting team located onsite at the Boao Forum.

Tencent reportedly beat other heavyweight contenders such as Sogou and iFlytek to secure this prestigious demo opportunity at the Boao Forum after a 3-month long process. Sogou is the 2nd largest search engine in China, which also provides a free online translator, built in part through leveraging its investment in China startup UTH International, which provides translation data and NMT engines. iFlytek is a listed natural language processing (NLP) company worth about USD 13 billion in market capitalization. Its speech recognition software is reportedly used daily by half a billion Chinese users and it also sells a popular pocket translation device targeted at Chinese tourists going abroad.

But given what went down at the Boao Forum for “Mr. Translator”, Tencent’s competitors are probably seeing their ‘loss’ as a gain now. The social media gloating aside, this incident has sparked off an active online debate on the ‘what and when’ of AI replacing human jobs.

One netizen said on Sina Weibo, “A lot of people who casually say that AI can replace this or that job, are those who do not really understand or know what those jobs entail; translation included.”

However, Sogou news quoted a veteran interpreter who often accompanied government leaders on overseas visits. She said, “As an interpreter for 20 years, I believe AI will replace human translators sooner or later, at least in most day to day translation and the majority of conference interpreting. The former probably in 3-5 years, the latter in 10 years.”

She added that her opinions were informed by the fact that she frequently did translation work for IT companies. As such she was well aware of the speed at which AI and processor chips were advancing at, and hence did not encourage young people to view translation and interpreting as a lifelong career, which she considers to be a sunset industry.