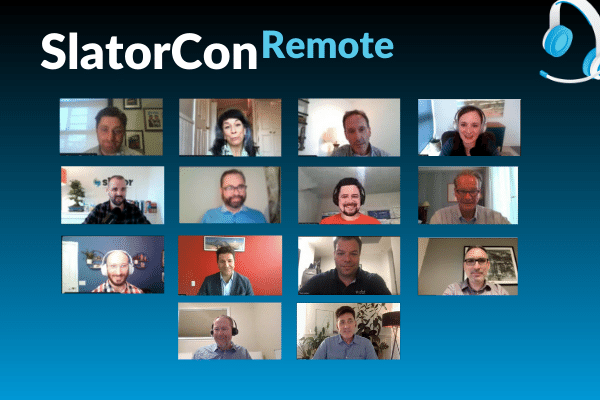 Language industry stakeholders from around the world fired up their laptops on September 8, 2021 to join over 340 of their colleagues at SlatorCon Remote.

The record turnout comprised a balanced mix of stakeholders — more than 40% from the client-side, roughly half representing language service providers (LSPs), while investors, advisers, and others made up the remaining tenth.

The SlatorCon Remote September 2021 audience also represented a good mix geographically. About a third joined the online conference from Europe, roughly the same from North America, while the rest checked in from either the UK, the Middle East, South America, or elsewhere.

Slator Managing Director, Florian Faes, kicked things off with a quick discussion on business opportunities arising from the emerging “supercycle,” a phenomenon he first spoke about during the previous leg of the conference.

“It’s a very exciting time for the language industry,” Faes said, adding that the swirl of activity is characterized by several things. For instance, the advanced adoption of AI — driven in part by big tech-led R&D into language technology — has attracted a lot of interest from investors and, in turn, accelerated M&A.

He touched on how buyers and LSPs could best take advantage of the supercycle, including frontier technology. In a fun way of driving home his point, Faes took a break from speaking by having a couple of avatars complete part of his presentation on frontier tech; first in English and then in German.

Joshua Gould, CEO of thebigword, began his track with anecdotes from interpreters on the frontlines, working in places like Afghanistan as well as with refugees back home.

He then pointed out the many benefits of working on government contracts, both in terms of economies of scale and R&D. About the latter, Gould said public sector clients are willing early adopters of AI, perhaps more so than private companies.

He likened winning a government contract to being a venture capitalist in that “you have to underwrite it.” But, Gould told the audience, “the great news is that all of these contracts are advertised publicly. So you don’t need that telemarketing, bullpen-style team to go and find [them].”

Having worked with government clients for nearly two decades, the CEO was also able to share proven strategies to landing and delivering public sector contracts, such as how to organize the team and expand an LSP’s offer through supply chain partnerships.

Internationalization Lead at Pinterest, Francesca Di Marco, heads global development for product and marketing at the social networking platform. She shared her team’s journey: from being a translation services unit to “designing and developing the product experience in a way that removes barriers to international deployment.”

Outlining Pinterest’s three-step journey to internationalization maturity, she highlighted how they managed linguistic assets and data in the tactical phase and then moved on to supporting the organization in the strategic phase.

According to Di Marco, it was important to build ties internally with “cross-functional partners” within the organization — such as Pinterest’s engineers who make up 60% of the company. And while they built these internal partnerships, they outsourced as much as possible to vendors.

Moving forward, she sees a challenge around staffing. She said, “We are [no longer] relying on the conventional model of translation and review. So we don’t only need translators and reviewers but specialists in so many different areas that are really, really hard to find.”

While the SlatorCon audience kicked back during the networking break, they listened in on Boostlingo CEO Bryan Forrester and Slator Co-founder and Commercial Director Andrew Smart talking about the US market, the explosion of telehealth over the past year, and how the Texas-based interpreting software provider is dealing with the demand.

According to Forrester, it is not such a good idea to start hiring salespeople first because “if they’re hired into a bad process, they’re not going to execute well.”

He also outlined the OPI and VRI sales funnel, detailing which activities and tools a team can use to move the customer from awareness to interest to desire for the product and, finally, acting on a purchase.

Next up was Yair Tal, CEO at BLEND, who talked about how brands (“from tomatoes to Tesla”) behave and work to reach a global audience. “Every seller aims to become natively local,” he said. He also shared insights about a leading Chinese e-commerce website, where 9 in 10 customers come from outside China; and how Brazil is its biggest client.

Tal explained how LSPs must develop their offer beyond translation to properly serve clients. As an example, he cited BLEND’s recent acquisition that will help them expand their offer to include voice. The CEO also went through a number of case studies to show how BLEND supported the client’s sales and marketing decisions to help grow revenues.

Trading views on the panel moderated by Slator’s Faes were three CEOs from companies steeped in AI: Jochen Hummel, CEO of Coreon and ESTeam, who joined the conference from Germany; Michel Lopez, Founder and CEO of e2f, who checked in from Florida; and Konstantin Savenkov, CEO of Intento, who spoke from California.

The panel tackled the hottest topics in the field of AI-generated content, such as machine translation post-editing (PEMT), optical character recognition (OCR), automatic speech recognition (ASR) and, of course, text transformers (e.g., “GPT-3 is definitely a big thing,” Hummel said before sharing a URL with the online audience as proof).

Lyutfaliev fielded a question from the audience on what advice he would give a professional translator who wants to be an asset to their game loc team. He said, “If you’re starting from scratch, build your network. Try to understand who the players in the industry are. Working with people from LSPs would be my first and best advice.”

Asked if Riot Games plans to integrate machine translation in the future, Lyutfaliev said he thinks the gaming industry is definitely moving forward in that direction. While he pointed out that the sector tends to be one of the last to adopt because of the highly creative and culturally nuanced aspects of games, he said, “as the industry continues to evolve, I want to explore humans in the loop and do some pilots.”

Next, Slator’s Research Director, Esther Bond, introduced what she called the headline panel, SlatorCon’s final session of the day. Discussing video localization were Fardad Zabetian, Co-founder and CEO of KUDO; Chris Reynolds, EVP and GM for Worldwide Localization and Fulfillment at Deluxe, and Tom Livne, CEO and Founder of Verbit.

Asked by a member of the SlatorCon audience about using content from the projects they undertake to gather data and use it for machine learning; to wit: “Do you view this content and data as internal IP only or also a business opportunity to sell to other interested parties for AI improvement?”

Deluxe’s Reynolds said they like to keep such data around as it benefits the team and the business. Verbit’s Livne qualified, however, that while it is a core part of their SLA in delivering service to the customer, they definitely do not sell the data to a third party. “That data belongs to the customer — to optimize a solution for that particular customer,” he emphasized.

KUDO’s Zabetian, meanwhile, said they “don’t collect any data because of the type of clients we have,” [who expect] very secure, protected meetings.”